This is the second summer since my husband died. To quote a grieving friend, the time passing is both “too quick and too long.” It is our second summer of not being able to share with him all that summer represents: more hours in the day, muggy nights, melting ice cream, cicadas signing through open windows…. It is our second summer without his garden bounty, his flip flops cast aside by the door, his voice filling the house…. Last summer was a summer of firsts without him and the sheer distance on the calendar from his death in December felt surreal. The opposite season somehow made me feel even farther away from him. But we took a vacation, the kids had jobs and activities. We tentatively tried to embrace summer. 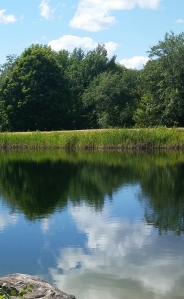 I have sat on the rock in this photo many times during my life. It rests next to a pond up the road from a favorite family destination. Last summer the kids and I loaded ourselves in the car and headed there for a couple days. As my car took that final turn onto the dirt road I have known since I was a little girl, and have been driving with my husband for the 25 years since I met him, I was keenly aware that it was my first time there without him. After parking and unloading the car, I went straight to that rock, sat down and cried.

This summer, our second summer, the kids and I packed up the car and headed there again. We stopped for snacks at the gas station (lottery tickets too!), filled the cup holders with ice tea and Gatorade, blasted the radio and hit the highway to head north. Then this thought ran through my head what a difference a year makes. Last year I could barely listen to music and certainly could not bear the unpredictable offerings of the radio. The energy in the car this summer was less tentative, less fragile. We were ready to have some fun. This summer I sat on the rock for less than a minute, barely lingering before jumping in to cool off from a hike. I kept thinking I can’t believe how much I am enjoying this day.

So there is hope in knowing that the second summer has been less tenuous, less raw. There is hope in knowing that you can sit on a rock one year and weep and then the next year jump off of it into a perfect pond, on a gorgeous summer day, and feel some joy. Oh, but my husband was on my mind the whole time. He loved that pond!  But even as I was fulling appreciating this Good summer day, I was aware that there are no guarantees that each summer will get better, get easier. Even each day in this summer has had its own flavor of grief. There is nothing linear about this life after loss. I remember hearing Marie Osmond interviewed years ago about the death of her son. She shook her head and said “I just don’t know…” and then her tears took over. The memory of this has stayed with me. Even though she was speaking about their specific circumstances, I recall watching her and thinking how incredibly honest she was. In grief, in life, we just don’t know. 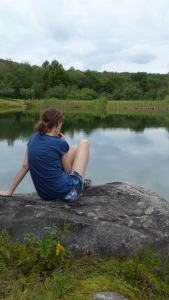 Two summers ago I sat on that very same rock. My sister took this picture of me. It was just a few weeks before we would find out about the cancer and just months before we would say good bye. I sat on that rock and had no clue what was coming – the bad news, the grace, the sorrow – all of it. Last summer I sat there and wondered how can I do this? This summer I barely sat still long enough to enjoy the rock, I was too busy soaking in a good day – but who knows what I don’t know. 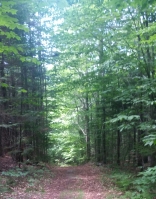 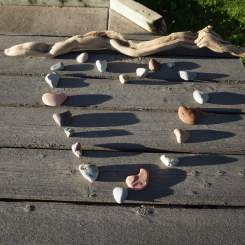 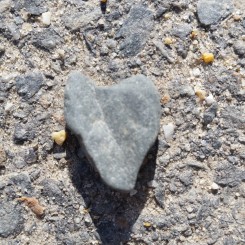 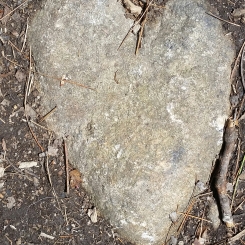